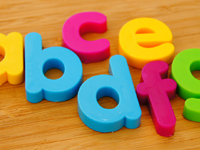 An alphabet is a standard set of letters that represent the basic significant sounds of any spoken language it is used to write. The English word alphabet came into Middle English from the Late Latin word alphabetum, which in turn originated in the Greek alphabētos. The Greek word was made from the first two letters, alpha(α) and beta(β). Put together the pieces of this jigsaw puzzle to see a photo with some colorful letters of the alphabet.

This game has not been rated yet. Be the first to rate this game.

Alphabet Jigsaw Puzzle is an online game made with Flash. You need to enable the Adobe Flash plugin to play this game.

Play free web games here at FreeGamesAlley. You can play action games, solitaire, word puzzles, shooting games & many other fun games. All web games can be played for free without any limitations.

Check out other great gamesites